In 2003, Jamez Terry (Burn In Hell, Buddy) and Kelly Shortandqueer (shortandqueer) moved to Denver, bringing along almost 2,000 zines. They started exploring the local scene, trying to figure out if a zine library already existed, was in the works or if there was any interest. Through the Breakdown Book Collective and Community Space, a group of awesome folks who were not only interested in making this happen, but were already working on a similar project, got together. Molly Z. (Growler Distro) had been working with a zine collection at Double Entendre, an independent music store, that she had hoped to turn into a library. An initial planning meeting was called for what would become the Denver Zine Library (DZL) and about 10 people showed up. In addition to meeting every other week for a few months, work parties were organized on the alternate weeks to fix up the space, decide how to categorize zines, input zines into the computer catalog, etc. In addition to Jamez’ personal collection, Paul, the owner of Double Entendre, gave us all of the zine he had been storing. John Porcellino (King Cat Comics) and Misun Oh (Tearjerker) gave us their collections before moving to San Francisco. The collection has grown through continued donations over the years.

The opening event was held on December 5, 2003 in the brand new DZL, highlighting local musicians and zinesters. The collection was housed in a detached shed in Kelly and Jamez’ backyard. Over 60 people came to celebrate, huddled together for warmth, eating donated bagels and looking through the new collection.

Visitors came by on weekends and the word spread beyond Denver. Travelers would request to check out the DZL when they were coming through and often donated their own zines. 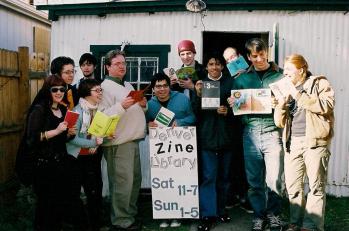 On March 12, 2004, the neighborhood zoning inspector left a notice that the Denver Community Planning and Development office had received an anonymous complaint about the DZL from a neighbor. Through many phone calls, e-mails and even personal visits, it was determined that the DZL was breaking zoning laws. A cease and desist order was issued and the zine librarians appealed it. During this process, Jason Heller wrote an article for the Westword about the problems the library was having. A response he received from the department spokesperson about the situation illustrated
the ridiculousness of how the case was being handled: “When you purchase a home, you 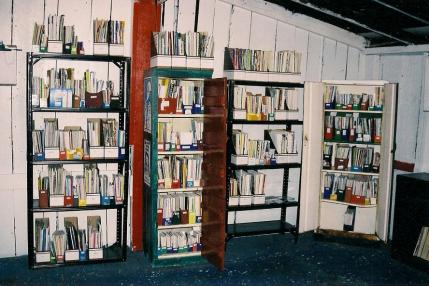 make the investment thinking that you have a good idea of how the adjacent property is being utilized. You don’t expect a gunpowder factory, recycling yard or UPS terminal to be located there.” Immediate neighbors and the landlord were supportive of the library. Unfortunately, it was unlikely that the DZL would win the appeal, so zine librarians began looking for a new space.

The DZL went into temporary storage for a short period of time before reopening at The Other Side Arts (TOSA) in the summer of 2004. Kristy Fenton was instrumental in this move and worked with Eduardo Gabrieloff to successfully incorporate the DZL as a 501(c)(3) nonprofit organization.

Initially, the collection was set up in the community area with couches. In many ways, this location was better suited to the vision of the DZL. TOSA contained artist studios rented by incredible local artists, had two galleries, hosted art openings, etc. The DZL started receiving more foot traffic based on the sandwich sign put out on the street, especially in the summer. Many folks who wandered in had never heard of zines before.

When an artist studio became available, the DZL excitedly moved in. In this space, the library continued to grow and zine librarians started doing more programming. Workshops were conducted in the DZL as well as off-site, and various classes visited the collection. When another, larger studio opened up, the DZL moved down the hall.

Unfortunately, after a few years, the zine librarians realized that the amount the DZL was paying for rent was not sustainable. Events helped defray costs but it seemed like the DZL was consistently in a financial crisis. In the summer of 2009, zine librarians decided to temporarily close the DZL. Instead of rushing to move immediately into a new space, zine librarians wanted to take some time to reassess priorities and vision as well as energy levels.

With continued community support, the DZL moved into the 27 Social Centre in July 2010. Much like being housed in TOSA, the DZL shared the new venue with other amazing folks. Instead of being surrounded by artists, the 27 Social Centre house multiple organizations and projects, such as P&L Printing, Sent(a)Mental Studios, Bread and Roses, Denver IWW and more!

When we first moved into the 27 Social Centre, we helped build walls to separate the projects, making the space our own. After being in a large open space for a while, we ended up moving to the front of the building with the Denver Community Health Collective.

At the 27 Social Centre, the DZL hosted many events from zine readings to workshops, and continued to expand our programming to teach people about zines at libraries, youth groups, and classrooms.

We’re thrilled to currently be a part of a thriving art building, once again, located at The Temple. Since we had to move out of the 27 Social Centre before renovations were complete, the zine collection sat in storage between March and July 2014, with our grand re-re-re-opening in August 2014. We share a studio with Dylan Scholinski and Sent(a)Mental Studios, sharing resources and creativity.

While our location is no longer big enough to host events, we still conduct workshops and provide a cozy place for people to get lost in our zine collection of over 15,000 zines!